Over the past month, THSC was on the ground in Austin watching and monitoring legislative events as they unfolded during the 30-day special session called by Gov. Greg Abbott.

The special session concluded on Wednesday, August 16 with some success and also some frustration, specifically from the House of Representatives blocking the conservative agenda set forth by the governor.

As we reported earlier in the special session, Governor Abbott called lawmakers back to Austin to address 20 priority conservative reforms after the Texas House blocked many of the same reforms during the regular legislative session earlier this year.

Among those 20 items were three important bills protecting parental rights:

The DNR Reform bill passed. But, the other two important bills did not. Here’s what happened to prevent these important pieces of legislation from passing during the special session.

Under current Texas law, a child in a hospital setting can be denied life-sustaining treatment against the wishes and without the knowledge of the child’s parent. SB 11 by Senator Charles Perry passed both the House and Senate and closed this loophole in the law by preventing a doctor from denying life-saving treatment over the objections of a parent or guardian.

Although House leadership, including Rep. Byron Cook, worked overtime to stall the bill after it was passed by the Senate, the bill ultimately made it through the House to Governor Abbott’s desk.

SB 11 marks one of the few significant reforms that managed to pass the House during the special session.

Such ordinances, which have been pushed in several major cities and school districts in Texas, usurp the parent’s ability to protect their child from compromising and unsafe situations.

The bill was blocked in the Texas House by Representative Cook and the House leadership team. Despite being a major priority for Governor Abbott and Lt. Gov. Dan Patrick and having a majority of support among both conservative and liberal Texans, the bill failed to pass the Texas House.

The bill passed the Senate, but SB 2 was blocked in the Texas House by House leadership.

Despite having nearly two-thirds Republican majority in the Texas House, conservative reforms have repeatedly been stopped cold in the House.

During the regular session earlier this year and even more prominently during the special session, Texas House Speaker Joe Straus and his leadership team took the clear role of playing goalie with the conservative reforms pushed by Governor Abbott and Lt. Gov. Dan Patrick.

Although Governor Abbott and Lt. Gov. Patrick campaigned hard on taglines of “Pass them all” and “20 for 20,” fewer than half of the agenda items made it past the Texas House goalie team to register on the political scoreboard.

Which House Members Stood Up to House Leadership?

In addition to a direct rebuke of House leadership by Governor Abbott and Lt. Gov. Dan Patrick, many member of the Texas House are openly opposing the dictatorial leadership of Representative Straus and his leadership team.

Thirteen members of the Republican Caucus signed a letter to caucus chair Tan Parker asking him to call a meeting to decide on new rules for how the House Speaker should be selected.

The meeting was held on Wednesday, August 16, and a follow-up meeting was set for September to continue the discussion.

More than half of Republican members (52 of 95) voted to reverse the Speaker’s ruling. However, Democratic members joined together to support the Speaker, creating a battle of wills. Ultimately, the challenge to the ruling failed, allowing House leadership to kill the bill.

It remains to be seen how Governor Abbott responds and whether he will call legislators back to Austin a third time to address the remaining agenda items that did not pass during the special session.

Regardless, the unmistakable takeaway from these two legislative sessions in 2017 is that the No. 1 reason why pro-family, pro-parental rights, pro-homeschool legislation has been blocked is House Speaker Joe Straus and his leadership team.

Undeterred, THSC will continue fighting to defend parental rights and champion homeschooling in Austin. But, we need your support to continue this fight. Will you consider donating to the THSC Watchmen today to support our efforts?

Also, be sure to sign up for updates from the frontlines to stay informed on the latest legislative developments. Our commitment to defending parental rights and your support of our mission is how we continue Keeping Texas Families Free. 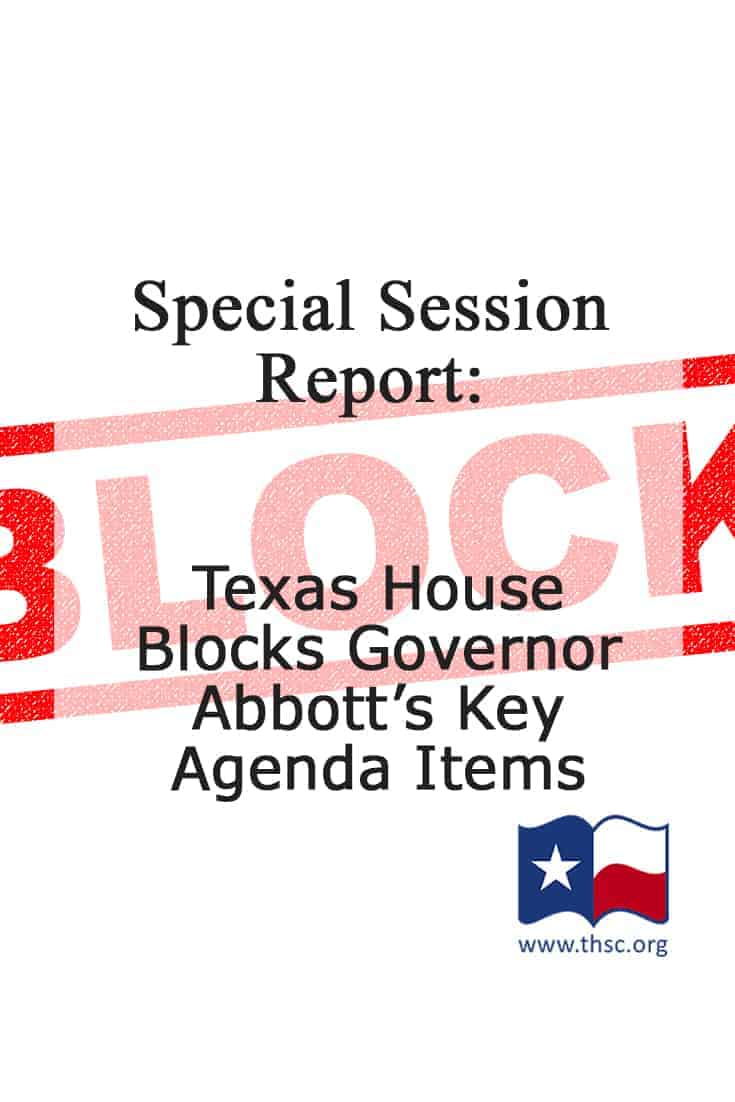