The Behind-the-Scenes, Herculean Effort That #BroughtDrakeHome 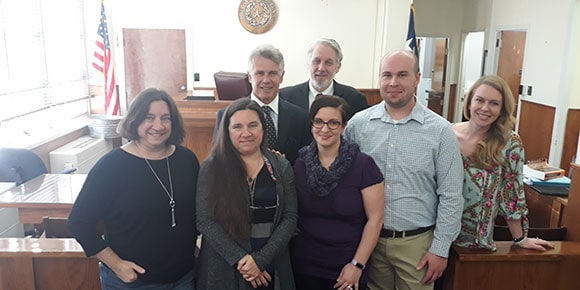 The Pardo family’s legal team poses for a photo after the case is dismissed on December 3. From left to right: Judy Powell, Johana Scot, Brian Loughmiller, Chris Branson, Ashley Pardo, Daniel Pardo & Krista McIntyre. Jim Pikl and Maureen Ball, mentioned in this article, are not in the photo.

The Pardo case was a six-month, pedal to the metal sprint to save a family who was being bulldozed by an unjust system.

Many people are unaware of the round-the-clock, herculean effort that went on behind the scenes and the team of people who came together to make it happen. The gag order that restricted the family’s legal team magnified that anonymity even more.

When giving thanks that the case has finally been dismissed and the family is free from CPS’ crosshairs, it seems only appropriate to recognize the enormous contributions that were made to accomplish it.

In a recent conversation I had with the family’s attorney, Chris Branson, Chris was reflecting on how amazed he was at the incredible effort that Krista and Johana had invested in the case. These two women worked hundreds of hours to protect the Pardo family and were foundational to the team’s success.

Krista McIntyre, director of Family Rights Advocacy (FRA), was involved in the case from the very beginning. Two days after CPS first left a business card on the family’s door, Ashley Pardo contacted Krista for help.

FRA is an organization that: “Advocates for family preservation against unwarranted government intervention.” FRA has helped hundreds of families in CPS investigations to obtain a “ruled out” disposition. Krista is the heart and soul of the organization.  When Ashley contacted Krista, she immediately jumped in to help.

Krista also reached out to Johana Scot, executive director of the Parent Guidance Center (PGC), for help.  Of all the groups THSC has worked with in Austin to protect the right of families to raise their children, none has been in the fight longer or more deeply than PGC.

Johana Scot and Judy Powell, the brains behind the organization, walk the halls of the Capitol daily to protect families. Their list of defeated bills is long.

Johana came on the scene of the Pardo case and immediately conducted a multi-hour consultation to take stock of the situation.  When the Pardos mentioned that they were members of THSC, Johana told them to contact us to receive legal assistance.

Many people don’t realize that from day four of the case, a full team of advocates was already beginning to assemble to help the family. During the next six months, Johana and Krista invested hundreds of hours helping the family to navigate the labyrinth of CPS meetings, monitored visits with Drake, hearings, medical bureaucracy and emotional turmoil that engulfed the case.

Johana, the team’s resident medical consultant, advised the family’s attorneys on the complex medical issues in the case and brought perspective from numerous “medical abuse” cases that she had helped families navigate in the past.

The two women worked late nights and drove hundreds of miles, with no task too big or too small to deserve their attention. Of everyone who invested their time and talent to help the Pardo family, nobody invested more than these two women.

In addition to the tireless work of Johana and Krista, the Pardo family had a top-notch team of attorneys defending them all the way.

Chris Branson, THSC’s special counsel on CPS issues, regularly handles CPS investigations for THSC members. When Johana Scot learned that the Pardo family had a THSC membership, she knew that Chris could help. Chris was called into the case on day six and instantly inserted himself between the family and CPS to protect them.

Chris demanded to know the allegations against the family, something which CPS was legally required to tell him but which they refused to do. Chris battled with CPS for the following six months by filing motions, defending the family at hearings and helping them to navigate the minefield of legal risks that come in a CPS case.

Maureen Ball, a family law attorney and homeschool mother from Conroe, consulted on the case from the early stages. Maureen also acts as THSC’s special counsel on custody issues, regularly consulting with THSC members who find themselves in custody disputes.

Maureen invested substantial time into helping the Pardo family by driving to hearings, consulting with the legal team and working constantly to obtain thousands of pages of medical records from Children’s Medical Center.

After the infamous July 2 hearing where Judge Michael Chitty rubber-stamped CPS’ lawless removal of Drake, the team brought in appellate attorney Jim Pikl. Jim, whom THSC worked with in 2010 to defend a homeschool father in the infamous Jim Loose case, took the Pardos’ case to the appellate courts.

Jim’s victory for the family at the Supreme Court of Texas was a death blow to CPS’ case against the family and a clear turning point.

After the victory at the Supreme Court of Texas, Brian Loughmiller was brought on as a second attorney to help the family at the trial court level. Brian, who also worked on the Jim Loose case, worked with Chris to negotiate the ultimate dismissal of the Pardo case on December 3.

Brian went back and forth with CPS for weeks discussing the terms of a “family plan,” a document in CPS cases used to outline action steps required before the agency will end its case against a family.

After weeks of discussion, CPS finally agreed to dismiss the entire case and simply walk away.

In addition to the family’s official legal team, numerous other individuals and organizations invested their personal time and resources to help defend the family.

Paul Hastings, a THSC Advisory Board member, organized a team to launch a viral video and webpage that garnered millions of views, collecting donations and petition signatures to help the family.

Andrew Brown from the Texas Public Policy Foundation and Bradley Pierce from Heritage Defense Foundation both submitted appellate briefs to aid in the family’s victory at the Supreme Court of Texas.

Alliance Defending Freedom also submitted a brief to the Supreme Court of Texas arguing that the gag order placed on the family was unconstitutional.

Cecilia Wood, a family law attorney from Austin who handled and ultimately won the infamous Tutt case, filed amicus briefs on behalf of THSC arguing that the family’s constitutional rights had been violated.

Dozens of lawmakers and organizations also supported the family by co-signing the above-mentioned briefs to the Supreme Court of Texas.

When Good People Fight Back

It would be impossible to name all of the many individuals and organizations who helped by sharing information, informing the public, and attending hearings.

Needless to say, the Pardo family’s story galvanized an entire state, which overwhelmingly coalesced to their defense. It is a testament to what good people can accomplish when they stand up against injustice.

As we give thanks to God for the victory in the Pardo case, let us also remember the thousands of hours and the enormous team of people who banded together to defend this innocent family.

It should also cause us to stop and think: What happens to families who face similar circumstances but whose names never make the news and whose cases nobody knows about?

The enormous, herculean effort required to save the Pardo family underscores just how easy it could be for an innocent family to be eaten by the system and never be heard from again.

While CPS heroically protects thousands of children who are in dire need, innocent families and children should not have to pay the price. If there is one clear takeaway from the Pardo case, it is that the CPS system is surely broken when an entire state must fight back to vindicate a single, innocent family.

A college campus tour guide is a valuable resource...

How the Tim Tebow Bill Works

Texas Home School Coalition gives a basic overview of how the Tim Tebow bill works and the effects it would have on Texas homeschool families.