During every legislative session, THSC and the homeschooling community are on high alert for bills like HB 1549 that threaten homeschooling and parental rights. In fact, homeschoolers have a reputation in Austin as a community that cares about and defends the rights of all parents, not just their own rights.

There are times, though, when THSC’s Policy team runs across bills that you would not believe could ever actually be filed in Texas. Nevertheless, during every session, there is at least one “you would never believe they tried it” bill that gets filed.

During the 2017 regular legislative session, that bill was the dangerous House Bill 1549 filed by Rep. Cindy Burkett.

In simple terms, the bill would have created a system where CPS could make regular monthly visits to the homes of entirely innocent families who CPS believed to be “at risk” of committing abuse or neglect at some point in the future.

To be clear, the bill contained no qualification that these were families already being investigated for abuse or neglect. Rather, it would have allowed CPS to visit the home of any family they believed displayed “risk factors” and could schedule monthly visits to that family’s home.

Under the bill language, a “risk factor” could be anything that CPS believed would make a child susceptible to abuse or neglect.

Specifically mentioned in the bill was one determinant of whether a family is “high risk”—are they more than 50 percent below poverty level?

THSC went to work fighting this bill throughout the legislative process:

This was accomplished before HB 1549 was passed and sent to Governor Abbott for his signature.

After first coming across the bill in February, the THSC Policy team in Austin began working with like-minded advocates, organizations, attorneys and legislators to raise awareness of the threat.

As we always do before taking a public position against a bill, THSC visited the bill author’s office to express our concerns and try to discuss possible solutions.

The office staff members were cordial, mentioned that they had received some other similar concerns about the bill, and expressed that they planned to make some changes after a scheduled hearing and welcomed THSC’s input.

Encouraged by this, THSC’s team thanked the staff and explained that we would still have to testify against the bill as long as the dangerous language was included. However, we were very willing to discuss changes after the hearing to resolve concerns.

This led to March 20 when the bill was scheduled for a public hearing before the Texas House Human Services Committee.

Leading up to Mar. 20, THSC and other advocates organized to oppose the bill. Then, on the day of the hearing, THSC, activists and organizations lined up to testify in opposition to the bill, drawing the committee’s attention to the threats to Texas families buried in the bill text and explaining the likely consequences of passing the legislation.

During the hearing, Rep. Gene Wu (D) challenged THSC’s concerns by claiming that a family who was innocent could simply refuse to allow CPS entry.

This prompted a heated debate between Representative Wu and THSC Policy Director Jeremy Newman over whether the right of Texans to refuse CPS entry justified sending CPS to the door of innocent families.

At the end of the hearing, bill author and State Rep. Cindy Burkett stated that her intent had only been to instruct CPS to regularly visit the homes of families already receiving CPS services. She said her intent was not to target innocent families who had been accused of no wrongdoing.

Representative Burkett also stated her willingness to meet with those who had concerns and make any necessary changes to the bill.

After the hearing, THSC met with staff members from Representative Burkett’s office to discuss changes to the bill. Going section by section, each area of concern was clearly outlined and a solution was agreed to. We also discussed several lower profile areas of concern.

Having come to an agreement on how each section should be fixed, THSC’s team was hopeful that the issue was resolved. However, another issue needed to be addressed.

A Surprise Vote Was Called

On April 13, THSC received word that the bill was scheduled for a committee vote that day. It represented a serious concern since THSC’s team never received the most recent draft of the bill and could not see what version would be voted on.

After a friendly office shared a copy of the bill language, THSC’s Policy team discovered that one key section of the bill—in fact, the most important section—had not been fixed as agreed on by the bill author’s staff.

Rather than clarifying that CPS would be allowed to visit only those families who were already in CPS services, the relevant section of the bill was restructured into a “pilot program.” This would apply to only 2,000 families, but innocent families could still be targeted.

THSC began contacting offices on the committee to make it clear that the changes made were not sufficient and that innocent families could still be targeted under the latest version of the bill.

With the end of the legislative session drawing near, the committee agreed to vote the bill out contingent on Representative Burkett’s promise to make further changes to the bill on the House floor.

Negotiations Break Down on HB 1549

THSC’s Policy team reached out to Representative Burkett’s office again to inquire why the agreed-upon changes had not been made. We also sent a copy of the exact changes that could be made to change THSC’s position from opposed to neutral.

In response, THSC was told that the changes had not been made because the office considered them unnecessary. The office also said they would not accept any attempts to fix the bill on the House floor for the same reason.

THSC Sounded the Alarm and Prepared for Battle

After receiving this information, THSC’s team sent out alerts to the homeschool community to raise the alarm about the threats included in the bill. Because the session was nearing the end, the bill was fast-tracked to the House floor, leaving little time to prepare for a floor vote.

Homeschoolers around the state began calling their Representative to oppose the bill. THSC also coordinated with activists and organizations in Austin to visit and revisit each of the 150 House of Representatives’ offices prior to the day of the vote.

Additionally, THSC worked with parental rights champion Rep. Dustin Burrows to draft an amendment that would be offered on the House floor to fix the bill in the event that it passed.

Victory on the House Floor

By the time of the floor vote, so many homeschoolers had called their Representative’s office that THSC’s Policy team began receiving phone calls from legislators on the House floor asking for clarification on what could be done to fix the bill.

The bill was fast approaching its time on the schedule. At the same time, the pressure surrounding the vote became strong enough that Representative Burkett finally indicated that she was willing to accept the amendment. This included the same language that had been originally discussed before the bill was even voted out of committee.

With a solution in place and agreed on, the amendment was successfully added without objection and the bill passed the House floor.

Round Two: Fighting Off Additional Threats

After victory on the House floor, THSC monitored the bill as it made its way through the Texas Senate. Thankfully, the bill was picked up by Sen. Lois Kolkhorst, a conservative Republican who also happened to be carrying two of THSC’s CPS reform bills in the Senate.

Knowing the concerns raised about the bill in the House, Senator Kolkhorst made even deeper cuts to the bill language and passed it through the Senate without allowing any harmful amendments.

However, because the bill passed the Senate and the House in two different versions, a “conference committee” was appointed. This required five legislators from the House and five from the Senate to negotiate a final version of the bill to send to Governor Abbott’s desk.

Once the committee was appointed, THSC received word that Representative Burkett planned to offer changes again to include language in the bill related to home visits by CPS.

THSC’s team reached out to friends on the committee seeking information about what specific changes were being proposed. We also requested that no changes to the home visiting program be made in conference committee, which takes place entirely behind closed doors and is not open to the public.

Senator Kolkhorst was steadfast in her refusal to accept any harmful amendments. She gathered enough support on the committee to prevent any negative changes to HB 1549 before it was sent to Governor Abbott.

With the help of Representative Burrows in the House, Senator Kolkhorst in the Senate, several activists, other conservative organizations, and homeschoolers from across the state of Texas, HB 1549, which started off as an egregious and unfettered increase in CPS power, finally passed with all threats to Texas families decisively conquered.

What is THSC Focusing on in Austin During the Special Session?

Although no CPS issues are being considered during the 30-day special legislative session currently underway in Austin, THSC’s Policy team is once again on the ground at the Capitol reading legislation, testifying in committee, and defending homeschoolers and parental rights.

Currently, three issues related to parental rights are being considered by the legislature. THSC needs the support of homeschoolers to continue the fight in Austin.

A generous donor has pledged to match donations up to $5,000 during the special legislative session. Would you be willing to donate $35, $50, $100, or even $200 to help THSC defend homeschooling and parental rights in Austin?

This is how we join together Keeping Texas Families Free fighting threats to Texas families like HB 1549!

Donate to the THSC Watchmen Program 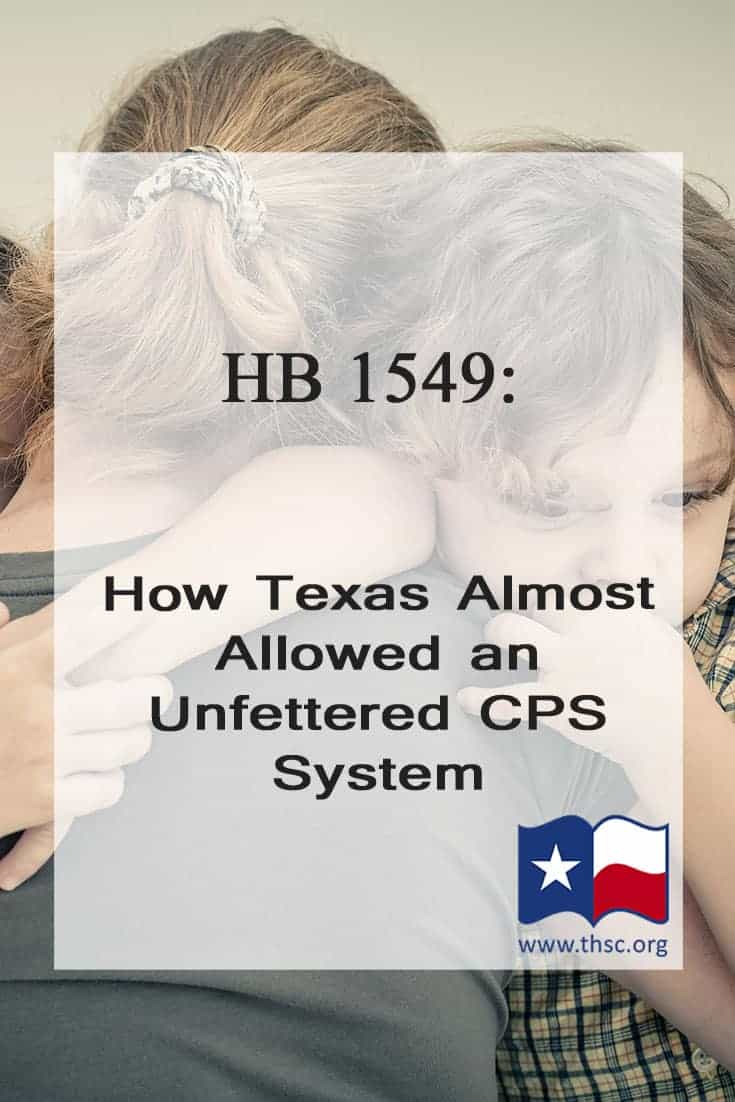