On August 3, a letter signed by a bi-partisan coalition of 26 lawmakers and policy leaders was delivered to the Commissioner of the Department of Family and Protective Services (DFPS) demanding the Pardo family be removed from the Child Abuse Registry.

The letter, lead by THSC President Tim Lambert, details the contradicting explanations and baseless justifications cited by CPS as their reason for placing Ashley and Daniel Pardo on the Child Abuse Registry.

Despite the family winning their case in court, CPS retaliated after their loss by placing Ashley and Daniel Pardo on the Child Abuse Registry. Placement on the registry designates a family as child abusers and stays on their record indefinitely. 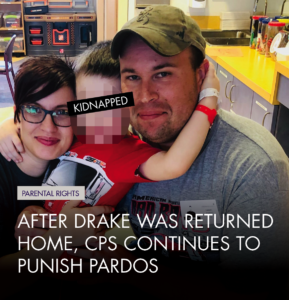 Texas Leaders Say “No” to the Abuse of Power

The letter to the Commissioner of DFPS outlines how CPS’s case against the Pardo family was full of mistakes from the beginning, which ultimately lead to CPS dismissing the case after the Supreme Court of Texas (SCOTX) ordered that Drake be immediately sent home.

Leaders are calling on Commissioner Jaime Masters, who has direct oversight of CPS, to have Ashley and Daniel Pardo immediately removed from the Child Abuse Registry.

The request was signed by 16 lawmakers from the Texas House and Texas Senate, including two committee chairmen with direct oversight of CPS, one of them a Republican and the other a Democrat.

The outrageous nature of CPS’s decision to place an innocent family on the Child Abuse Registry has drawn the attention of both policymakers and policy organizations.

THSC is currently working alongside several other policy organizations and experts to prepare legislation that will reform the Child Abuse Registry and prevent innocent families from languishing on the list at the whim of CPS.

The purpose of CPS—to protect children—is vital. But CPS isn’t protecting Drake or his family. They are traumatizing them. Can you help defend the Pardo family with a gift of $20, $100, $500 or another amount?