Are parents fit to raise children and do fit parents act in the best interests of their children?

In 2000, the Supreme Court of the United States decided the landmark parental rights case Troxel v. Granville. The Court based its opinion on nearly 100 years of legal precedent, ruling that the Due Process Clause of the Fourteenth Amendment requires courts to presume that parents are fit and that fit parents act in the best interests of their children.

Legally speaking, this presumption prevents a court from overruling a parent’s childrearing decisions simply because the court disagrees. The court must first find either that a parent is not a fit parent at all or that some type of harm would be done to the child if the court does not intervene.

So do Texas courts follow these constitutional rules when overruling the decisions of Texas parents?

In the most disturbing analysis, Texas courts failed to protect parents’ constitutional rights more than 78% of the time in certain types of cases. It is hard to describe these results as anything other than a systematic trampling of parental rights in Texas.

First, it’s important to understand the context of these cases.

Before fully examining the results of this research, it’s important to understand how most family law cases work.

When a person (a family member, a neighbor, etc.) sues a parent for custody of, access to, or possession of the parent’s child, the court will generally issue a “temporary order” at the outset of the case. These orders determine things like who the child should live with and who has the right to make certain decisions for the child while the case is pending.

These orders are governed by few rules, are not appealable, and generally have no deadlines.

Because these cases can take years to resolve, a court, under the guise of “temporary” orders, can essentially overrule the childrearing decisions of a fit parent (such as a parent’s decision not to let another person have unrestricted access to the child) without having to make a “final” ruling on the case.

When a court finally concludes a case, it issues a “final order” expressing its ruling. It is only at this point that a parent can actually appeal the court’s ruling.

Because “temporary” orders cannot be appealed to a higher court, and because critical, life-changing, years-long decisions are often made through temporary orders, it is especially important that courts respect a parent’s constitutional rights in the process of making such an order.

But do they? Sadly, the research says no.

The first result was that the parental presumption was misapplied in 43.48% of cases that were appealed from a final order. In other words, in 43.48% of appellate cases, the lower court did not make the constitutionally required findings before overruling the childrearing decisions of fit parents. 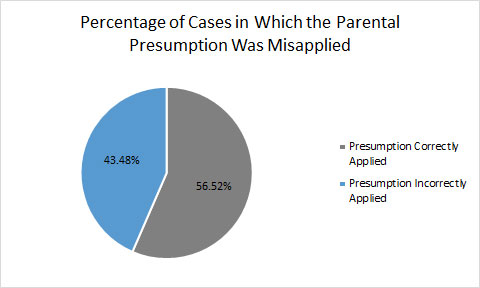 Here’s where things get even more complicated. As mentioned above, parents cannot appeal temporary orders that infringe on their parental rights, even if the orders last for years. The 43.48% error rate only reflects “final” orders. Parents can be completely eaten alive and have their families completely destroyed by the family law system long before they ever reach a final order.

In layman’s terms, this literally means that the parent must prove that the judge’s decision was not simply wrong, it was so wrong that the judge had only one legitimate decision he or she could have made, but the judge still blew it.

Because this is such a high legal bar, the special legal procedure (known as a mandamus) is very difficult, very expensive and extremely difficult to win.

The nature of our judicial system’s recordkeeping creates several inherent limitations in the study. For example, not every case that comes before an appellate court receives a written opinion; many don’t. If an appellate court rejects a case without offering an opinion, the reason for rejection is unknown and cannot be tracked. Additionally, these numbers can only track cases that make it to the appellate court in the first place.

For this reason, these numbers only represent the tip of the iceberg. The reality is that many of the cases in which the parental presumption has been misapplied are undetected simply because the families can’t afford to litigate their rights or because the appellate courts fail to give clear guidance on their reasoning.

One thing is clear: Parents who can afford to challenge actions by lower courts are seeing the lower courts’ orders overturned at an alarming rate. Parents who cannot afford expensive appeals or complex challenges to temporary orders are lost in the system.

THSC is currently working to solve this and many other problems as we continue Keeping Texas Families Free!

THSC Watchmen Bring You Facts about HB 1335 and SB 3

HB 1335 establishes an Education Savings Account Program for disadvantaged and special needs students, including children with disability, victims of bullying, students convicted of truancy, students who have dropped out of school or are at risk of dropping out, or are found to be victims of human trafficking/sexual assault.

About the Author: THSC Webmaster