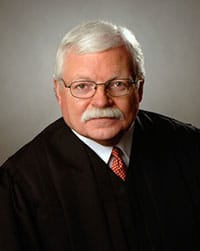 As one of the primary judges involved in the infamous Drake Pardo case, Judge Michael Chitty cemented his place on the Wall of Shame as a result of his conduct early on in the Pardo family’s legal battle.

On June 20, 2019, Drake Pardo (4 years old) was illegally removed from his home by CPS. CPS refused to inform the family of the allegations against them (a legal requirement) and showed up unannounced at the family’s door with a signed order from a local judge allowing them to remove Drake. Read the family’s full story at BringDrakeHome.com.

On July 2, 2019, the family appeared in court for a legally required hearing to determine whether the removal was proper. Although the original removal had been authorized by a different judge, for unknown reasons Judge Michael Chitty stepped in to conduct the July 2nd hearing. Judge Chitty ignored the overwhelming evidence in favor of the family and authorized CPS to keep Drake for up to a year, a decision which would later be reversed by the Texas Supreme Court.

At the July 2nd hearing, CPS accused the family of seeking unnecessary medical care for Drake. However, uncontested testimony at the July 2nd hearing revealed that, without exception, every medical test or procedure Drake had ever received had been diagnosed or recommended by at least one, and often multiple, specialists in the field.

Furthermore, CPS admitted under oath that they decided to remove Drake from his home knowing that they had not pursued numerous alternatives that could have resolved the situation peacefully. CPS also testified that they had never seen or spoke to Drake or his family before the removal and that they have never spoken to a single doctor or other individuals who had any first-hand knowledge of any of Drake’s medical conditions.

Nevertheless, Judge Michael Chitty authorized CPS to keep Drake for up to a year despite CPS having failed to prove all three legal requirements outlined in Texas law:

To add insult to injury, at the end of the hearing, Judge Chitty placed a gag order on Ashley and Daniel Pardo, Drake’s parents, forbidding them from making any public comments about the case. The already traumatic and unjust removal was exacerbated and prolonged by these reprehensible orders issued by Judge Chitty.

As a result, while this case could have been closed at the hearing on July 2nd, it instead dragged on for nearly 6 months, traumatizing the family and Drake. A viral campaign to reunite the family galvanized the support of the state and people around the world.

Thirty-four lawmakers and major organizations filed and co-signed briefs with the 5th Court of Appeals and the Texas Supreme Court defending the Pardo family. Even the State of Texas itself filed a brief arguing that Judge Chitty’s use of a gag order on the family was a clear constitutional violation.

Even after Drake was returned home CPS continued their harassment of the family until the parties finally agreed to dismiss the case on December 3, 2019.

Because of Judge Chitty’s outlandish orders at the July 2nd hearing, the Pardo family was continually harassed by CPS for more than five months. The family was only spared a more devastating outcome because the entire state rallied behind the family and the Texas Supreme Court overturned Judge Chitty’s unlawful order.

Fortunately, Judge Michael Chitty is retiring from the bench, but his disregard of the Pardo family’s legal rights has earned him a prime spot on THSC’s wall of disgraceful judges.