You are free in Texas to home school your children, but that has not always been the case. Learn how others paved the way, through the threat of jail time and hard-won battles, to grant Texans the right to educate their children at home.

Join our effort to protect those very freedoms by becoming a member of THSC Association.

Your tax deductible donation below will load the next counterpunch needed to combat those who seek to take away our parental rights.

If you would like to be a part of the legacy of freedom, join THSC, or make a tax-deductible contribution.

The Leeper Decision:
Are home schools in Texas regulated? What does the Leeper Decision mean for Texas Home School Families?

According to the historical background provided in the Leeper decision, in the early 20th century, “No more than ten percent of school-age children attended public schools . . . many children were taught at home.”

Public school attendance was not mandated in Texas until 1916, at which point most children in the state did not attend public school. In 1923, these compulsory attendance laws were amended to exempt “Any child in attendance upon a private or parochial school which shall include in its course a study of good citizenship, and shall make the English language the basis of instruction in all subjects . . . .”

According to the evidence presented to the court in the Leeper case, at the time these laws were amended in 1923, “a child pursuing a bona fide course of study at home designed to meet the basic education goals of reading, spelling, grammar, mathematics and good citizenship was considered to be attending a private school.”

Thus, until the time of the Leeper decision, home schoolers had traditionally been exempted from compulsory attendance laws in Texas under the presumption that they were classified as a type of private school by Texas law.

In 1981, for the first time, the Texas Education Agency (TEA) changed its official interpretation of Texas’ compulsory attendance laws to state that home schools were not exempt from public school attendance because they were not classified as private schools for the purposes of the compulsory attendance statute. By 1985, the TEA had initiated prosecutions against at least 150 Texas families.

Attorney Shelby Sharpe, a home school father from Fort Worth, Texas, responded to these prosecutions by filing a class action lawsuit against the TEA defending the rights of Texas parents to home school their children free from the restrictions of Texas’ compulsory attendance laws.

As stated in the Leeper decision, “The dispute in this class action centers on whether the private school exemption includes children who are taught at home, in a bona fide manner, a curriculum designed to meet certain basic education goals, including a study of good citizenship.”  Thus, the debate surrounding the Leeper decision focused specifically on the correct interpretation of the compulsory attendance laws.

The TEA argued to the court that home schools, because they were not specifically exempted in the compulsory attendance statute, were in violation of the law and subject to prosecution for truancy.

Shelby Sharpe argued that the clear legislative intent behind the compulsory attendance statute was to exempt home schoolers, as evidenced by the fact that home schoolers had been considered exempt from the statute since 1923.

On September 4, 1987, the Tarrant County District Court ruled in favor of home schooling. After an appeal by the state to the Second District Court of Appeals, the decision was again upheld in defense of home schooling on November 27, 1991. On June 15, 1994, after the state had appealed a second time, the Supreme Court of Texas issued a 9-0 decision upholding the ruling by the lower court and cementing the right of Texas parents to teach their children at home.

In the final ruling, the Supreme Court reviewed the decision issued originally by the district court, which stated that “a school-age child: residing in the State of Texas who is pursuing under the direction of a parent or parents or one standing in parental authority in or through the child’s home in a bona fide (good faith, not a sham or subterfuge) manner, a curriculum consisting of books, workbooks, other written materials, including that which appears on an electronic screen of either a computer or video tape monitor, or any combination of the preceding from either (1) of a private or parochial school which exists apart from the child’s home or (2) which has been developed or obtained from any source, said curriculum designed to meet basic education goals of reading, spelling, grammar, mathematics and a study of good citizenship, is in attendance upon a private or parochial school within the meaning of Section 21.033(a)(l) of the Texas Education Code and exempt from the requirements of compulsory attendance at a public school.”

After reviewing the lower court’s decision, the Supreme Court of Texas stated in its final opinion that “From the record before us, we conclude that the district court’s declaration of the meaning of ‘private school’  in § 21.033(a)(l), as it relates to home schools, is clearly correct.”

The Leeper decision held that, so long as a home school met these requirements, it was considered to be a legitimate home school and exempt from the compulsory attendance statutes in Texas.

With the issuance of the Leeper decision came a strong defense for home schools in Texas.  Although sweeping in application, the legal impact of the decision remains narrower than many believe.

The Supreme Court included in its final decision a clarification that “Nothing in our opinion precludes the TEA from setting such guidelines for enforcement of the compulsory attendance law as are within its authority. Specifically, the TEA is not precluded from requesting evidence of achievement test results in determining whether children are being taught in a bona fide manner.”

Although it provided a clear defense for home schooling by establishing exemption from compulsory attendance, the Leeper decision maintained that the Texas Education Agency holds the authority to ensure home schools are meeting the educational requirements set forth in Leeper.

In the aftermath of the decision, school districts across Texas began intimidating home schools that they claimed did not meet the educational requirements outlined by Leeper.

THSC President Tim Lambert met with the TEA commissioner on behalf of the home school community and proposed a policy solution that was adopted by the commissioner. This has remained TEA policy ever since.  A home school family that is being questioned by a school district can offer a letter of assurance to the district verifying that they are meeting the requirements of Leeper, and TEA policy holds that the district must accept the letter as proof of a bona fide home school unless it has evidence to the contrary.

Today, more than two decades after the Leeper decision was laid down by the Supreme Court, home schooling in Texas is more vibrant than ever.  With the foundation set by Leeper, and the work that THSC President Tim Lambert did to shape TEA policy in Texas, home school parents around the state are able to teach their children in line with their beliefs, and in accordance with their children’s needs.

Here at THSC, we continue our work defending the right of parents to direct the care, control, and upbringing of their children, and we remain dedicated to Keeping Texas Families Free.

In March 1985, attorney Shelby Sharpe, on behalf of several home school families and curriculum suppliers, filed a lawsuit against all the school districts in Texas on behalf of all home educators in Texas. In what became known as the Leeper vs. Arlington class action suit (Leeper v. Arlington I.S.D. No. 17-88761-85), home educators asked the court to give a declaratory judgment on the question of whether or not the legislature had intended home schools to be private schools when they enacted the compulsory attendance statute in 1915. The basic question was, are home schools private schools for the purpose of compulsory attendance?

The Tarrant County District Court ruled that home schools are indeed private schools for the purpose of compulsory attendance. On April 13, 1987, presiding Judge Charles J. Murray issued a decision (binding on all 1,100 school districts) which was a complete vindication of the rights of parents to educate their children at home in the State of Texas.

The case was appealed by the state, and on November 23, 1991, the Court of Appeals, Second District, upheld the lower court’s ruling completely and without changes.

Shelby Sharpe was the lead attorney in the Leeper v. Arlington class action suit, the landmark case that settled the question of home schools in Texas being private schools. This case was heard at the District and Appellate court levels and by the Texas Supreme Court; it confirmed the freedoms that parents now enjoy in Texas, one of the best states in which people can home school.

Shelby Sharpe is now the general legal counsel for THSC Association and is ready and able to respond to legal issues related to home education in the state of Texas.

Mr. Sharpe shared his moving story of battle of the Leeper case, detailing God’s hand in the legal battle surrounding home schooling in Texas. As he shares the many ways that God directed and guided in the development of that legal case, he explains that though these events took place over ten years ago, he is still often overcome with emotion as he contemplates the divine provision and intervention that ultimately resulted in a unanimous decision by the Texas Supreme Court, moving the state of Texas from one of the most difficult states in which to homeschool into a small group of states that allow parents a great amount of freedom. 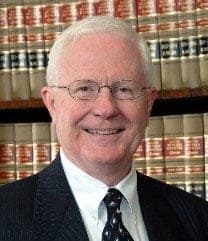